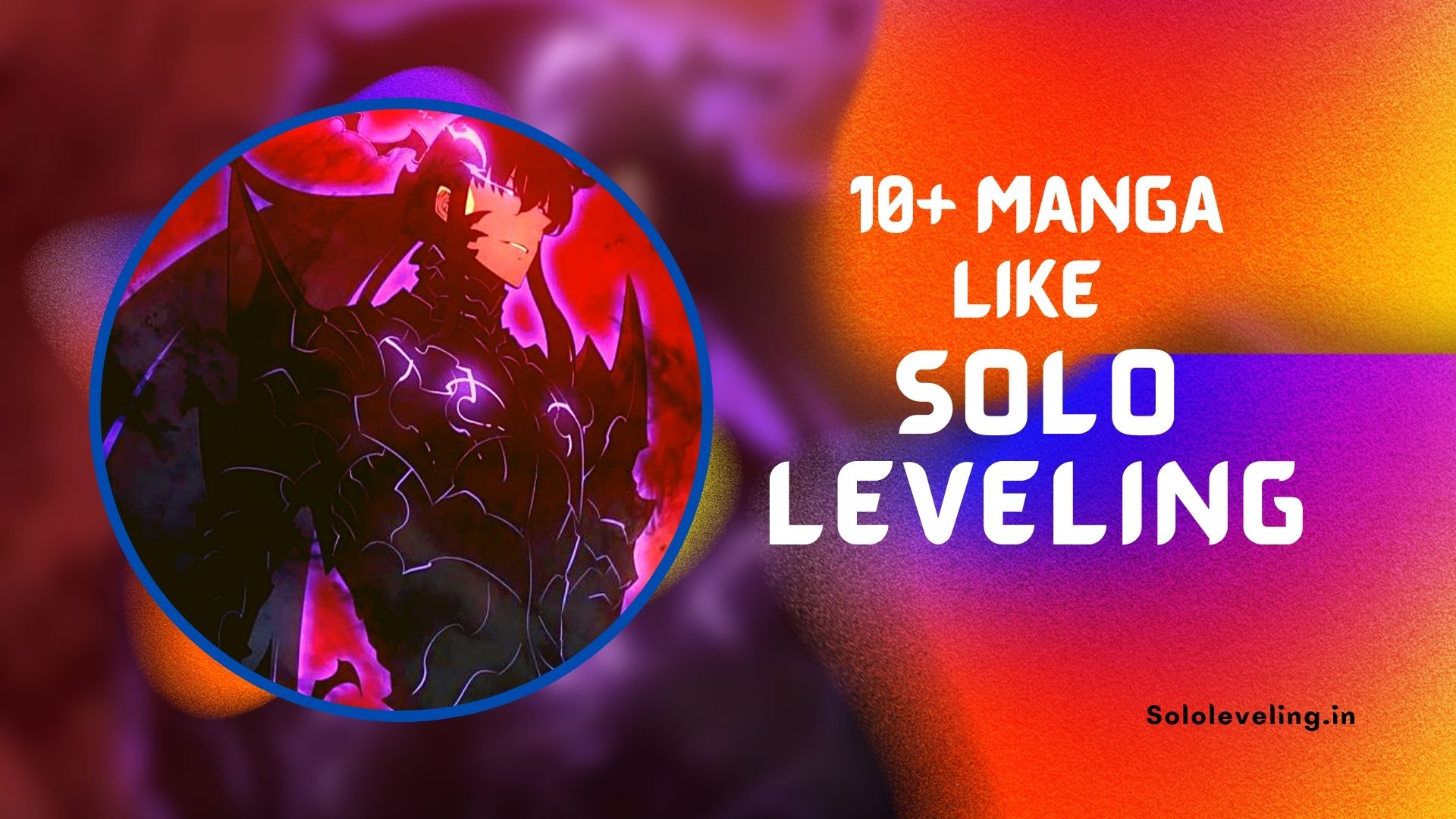 Hello, my dear friends! I hope that you have a wonderful day. I hope you are well and in good health.

I hope you are looking to find something entertaining to read during this period. So here is a new list.

It will be greatly appreciated by those who are fans of the popular manhwa Solo leveling. (Even if not, keep reading, the post will still be interesting.)

I will recommend manga with the same vibes, elements, and plot. We’ll start by briefly describing Solo Leveling, and then we’ll continue to the post with the recommended manga!

Here’s a summary of the solo leveling plot

Through a portal known as the Gate, our human world is linked to a mystery filled with deadly creatures. Hunters are people with extraordinary capabilities who fight against them and protect humanity.

Sung Jinwoo, the main character, is a Level E (the most straightforward level) since he lacks special abilities. Despite this, he does his best to help, complete his missions and pay for his mother’s medical bills.

Even though they don’t share many commonalities or points, both works have top-of-the-line action elements and so much hype!

The story takes place within a world in which fear of humans manifests itself into Devils. Denji, a young orphan, makes friends with the Chainsaw Devil Pochita.

Together they hunt devils to make money. Denji is killed one day, and he makes a partnership with Pochita.

This allows the boy to become a hybrid human/devil strong enough to fight against powerful devils.

He is also employed by the Public Safety Bureau, an experimental section that uses nonhostile devils to fight against other devils.

What does manga such as Tokyo Ghoul and Solo Leveling have in common? Each MC will also become stronger over time and develop a darker side inside them after certain events. This is a common element.

In the shadows of Tokyo lurk deadly creatures called Ghouls that kill people and eat them. Police are looking for them, but tracking them down is challenging as Ghouls hide behind the human appearance and seek easy targets.

Kaneki, a university student, is an average person who, after a terrible first date with a girl who was Ghoul in disguise, becomes a -half-Ghoul.

After this horrific event, his life will drastically change. He will be somewhere between two worlds and in the middle, where he fights for survival.

Arifureta – From Commonplace To The World’s Strongest

In a game-setted environment, a weak character becomes more muscular. It would be similar.

A standard high school class suddenly finds themselves in a fantasy, and every student becomes a hero that must save the world.

Each student has a different skill, but Nagumo Hajime has the only weak ability.

He’s always been a poor student; now, he is mere crafting with low stats. One day, he decides to explore a dungeon but falls deep. How is he going to survive?

A shy, weak boy is transformed into a hero in a -like the world. Jinwoo’s world is very similar to his.

But he discovers that this mysterious game is different from what he was expecting. He can’t quit this dangerous and even deadly situation.

The Berserker: Rises To Greatness

You’d love this manga if Solo Leveling were your favorite. They have so many similarities. Seeing is believing.

Kelvin awoke in a fantasy without any of his memories but with impressive skills.

Kelvin can defeat every enemy, and he becomes a powerful adventurer. Now his goal is to summon an angel follower.

He believes his memory loss was why he fell in love with her.

Even though there’s a romance subplot, both works focus more on the main character, who fights for survival and gains strength with experience!

Sword Art Online is an RPG game where users can interact with a Virtual Reality System and control their character.

But, when the long-awaited debut is made, logged-in players find out they cannot log out and disconnect the game.

It is necessary to pass the last level to get out of it. As the main character in the movie, Kirito is devoted to this goal, which also drives him to fight to get more powerful.

Asuna, a beautiful and robust girl who will become their partner to him in the future, will also meet Michael and become his companion.

Both mangas have main characters who struggle to gain strength and increase their level. They experience so much character development throughout the story!

It is a story about a group of ordinary high school students killed in an explosion and then reborn on a magical parallel planet in which there is an ongoing battle between the Demon King and the Earth.

There is one student whose previous life had been one of a Hikikomori, but they do not appear human anymore. Now, she is a weak spider instead of being a solid spider.

Moreover, she is trapped in a dangerous dungeon, which is full of creatures that are dangerous and can kill her. Will she be able to survive this hostile environment?

The formula never changes: A average guy eventually dies or almost dies and then starts a new, exciting life with unbelievable abilities.

He rises from-the bottom to-the top. After an un-fortunate and premature death, Tomokui Kanata finds him-self re-incarnated in a magical world as a Goblin.

In spite of this, he still retains all of the memories from this race, one of the weakest in his repertoire. As he begins to eat other creatures, Goburou, his new name, begins to gain strength. It is only a matter of time before he realizes this. So, he begins his

New life in this fantasy universe while surrounded by new subordinates. He also fights against powerful enemies.

The One That Exedes The Concept of Levels. They share many similarities, I’m sure. An example of this would be the game-based approach.

This fantasy is based on the idea that there are two kinds of humans: those who possess magical abilities and those who don’t possess them.

While the first is highly valued by society because it can defeat monsters and gain power, the second is entirely unusable.

Fate, the protagonist of this story, has always had an inexplicable ability that causes him to be hungry.

But, this ability turns up to be entirely different than what he and his family expected…

That time I got re-incarnated into a slime

The main character with no supernatural abilities suddenly acquires an extraordinary power, which is the most powerful in the entire world. It sounds pretty familiar, right?!

The series follows Satoru’s life. He is a Japanese salaryman living a stressful life. Nevertheless, he sacrifices himself one day to save the life of a colleague from being stabbed by a robber.

Unknown voices reach out to him and transport him to another after his death. Satoru will be extinct after he is re-incarnated as a slime or makes a pact with a mighty dragon.

This world will now recognize the protagonist as RimuruTempest.

Midoriya, an unruly young boy, lives in a world filled with heroes equipped with unique abilities.

This dream has been a dream for a long time. He hopes to become a hero and save people with a smile.

He saves Bakugo, his childhood friend, by rescuing him from a villain. Izuku then meets All Might. Izuku receives a special gift: One for All, his quirk.

The boy now has power and enrolls at U.A. High school to achieve his dream with his classmates.

Although there are many differences between them, they share the gaming system.

Momonga, a typical salaryman, likes to play the RPG. The servers of the game were shut down one day.

Momonga wishes to be there for the last hours of his favorite game and logs. When the clock strikes midnight, Momonga finds himself trapped inside his avatar.

He uses the situation to his advantage and takes control of the new world. While trying to understand the truth, he also wins.

HOW DID YOU FEEL ABOUT SOLO LEVELING?

Congratulations! You’ve reached the end of this post! It’s always disappointing when a manga (manhwa for Solo Leveling) that you love closes.

It’s a strange feeling that you get after finishing reading something. However, there is no successor.

It is comforting to know there are many mangas with the same elements, which can make it very enjoyable.

You’ve found what you are looking for with this list. So, that’s my job done.

I say goodbye and look forward to seeing you again!